The weekend started well as we had an amazing jump session with Warren. The training is with BS Berkshire and is hosted by Warren in a reasonably small (20x50 I guess) indoor school. It's spooky but such a great training tool as it makes me think! Warren really put us through our paces and was making Buddy and I really think about what we were doing. We focused on riding the hindleg, powering the canter and ensuring that I was commited to the jump. We started with cross to vertical along the long sides and then started building a grid down the centre line.

This was really hard as it meant I needed a really powerful canter out of the corner into the first jump which was about 10m in (we kept this very small, almost caveletti so it encouraged the hind leg but didn't punish any mistakes), one stride to a vertical then we built up to adding an oxer and then another small jump. This then became part of the course and we had a double on one long side and the vertical on the other plus the grid. A lot of fences for a small space and a big striding horse! But he was superb. Really starting to find his jump now and never, ever thought about saying no when I got it right or almost right!! I finished beaming and it was the first jump session I've had for ages where Warren hasn't had to point out all the good things we did - I could see the growth in us and finally felt positive again.

It was then all systems go to prepare for our BD debut at Team Quest on the Sunday. Our team - Blinged up Bullet Dodgers - are all Rockley Rehabs and Buddy is the longest graduate. We had our team uniform sorted and were ready to have some fun. The classes were jam packed, we'd all entered the prelim and there were 42 competitors in the class so we expected absolutely nothing from the day - although a point towards regionals would have been nice.

The weather was horrendous and scheduled to get worse but we were competing indoors so it wasn't as bad as it could have been. All of us warmed up well and I timed B's warm up perfectly - he was being a changer in the canter but that's going to take a while to eliminate completely but we are getting there. I went in determined to RIDE so I did a power trot around the outside. Halted, the bell rang and it was time to enter. He was naughty in his left canter and kept breaking but I corrected it quickly. When it was time to canter right I kept him straight, didn't let the bend go crazy and rode every stride. It felt awesome and I came out feeling that it was an 8 canter. I was really pleased with the test, it wasn't perfect but it was good. I was hoping for a mid 60's score.

Once ponies were put away we went to see how we'd done... well what we saw was incredible. Two scores in the 70's and a 67! We were all in the top 4. There was a looooong way to go and I did wonder if the judge was just being over generous with the scores so did not expect anything but with a team score of 211 I hoped we'd be in the top 10 teams. We trundled off home and I planned to pop back to collect the sheets later on.... 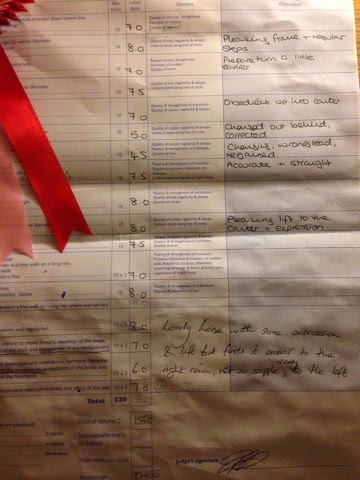 In the car on the way there I was thinking how awesome it would be if we managed a placing but then quickly discounted that though as there were 11 team scores to go after ours and with an overgenerous judge... it was unlikely. However, I walked in to the cafe where the scores were... walked up to the scoreboard and had to check a few times... we were still in the lead with only one more team to go. Emily was still in 1st place in our class, I'd been pushed down to 3rd and Lucy was still 6th. I was sending messages to the girls whilst waiting for the final team scores to go up and it felt so emotional. It took ages for the final scores to go up and they left the final score blank for a long time but finally they put it up. I had to stop myself from screaming 'yeessssss!' but we'd only gone and done it!! We won! 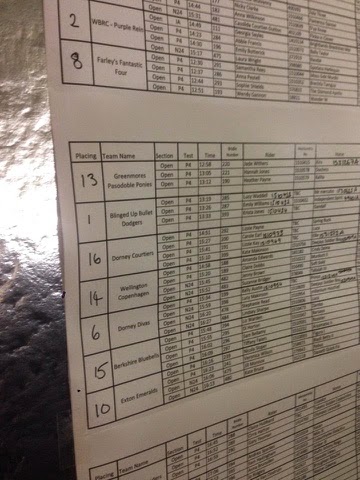 They did a proper prize giving and they told our story of being Rockley Rehabs (the secretary had asked where our team name came from), the whole room cheered and I ended up blubbing! It was completely emotional, very fairytale-esque and completely unexpected. To finish 1st out of 16 teams was just a massive achievement and we are now going to give it our best shot to get to regionals. Our next outing is on 8th March and I can't wait!
Krista at 11:34
Share