The focus for the last month or so has been completely on Area Festivals and getting me to a point where I am totally comfortable with the test and what I need to do and when! As usual Buddy has been throwing in some curveballs to keep me on my toes and I have been working so hard to try and get my position as good as it can be (there is still a long way to go!) and work out exactly what Buddy needs from me to support him.

The test riding sessions were going really well and I was feeling confident that we were as well prepared as we could be. The week prior to AFs I felt a bit under pressure, I had a lesson on the Monday and B was being a little devil and I finished feeling totally awful as he was being a pickle and I felt like I was doing everything right. He is so tricky sometimes and although there is zero malice in it I get incredibly frustrated when he wants to just take over but I can’t get cross as he is just having so much fun with it so I just have to find the right way to manage him to keep the enthusiasm but also make sure he works in the right way! 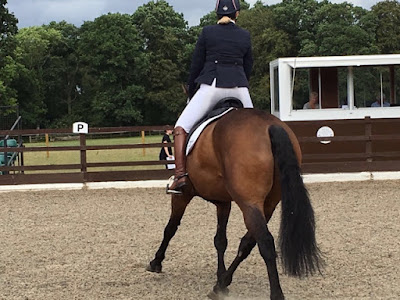 We had a final test riding session booked at Wellington two days prior to AFs and after Monday I wasn’t feeling that great about where we were at but Buddy pulled it out the bag and although we had changes in the left canter after the medium I felt much happier and knew what I needed to get things sorted. Thursday we hacked out and then had a quick run through of the canter work and I was feeling ready for the next day.

I got into the warm up at Wellington and B felt great and was listening. I have my warm up nailed at the moment and it fills me with confidence that I have a plan as soon as I get in and I know things I can add in if there are issues showing themselves. The canter was full of changes on the left so I wasn’t feeling confident as I was called into the ring but I said to myself that it is just one or two movements so don’t stop riding the rest. The bell rang and we started our test. The centre line was straight and confident, we lost a bit of power coming round the corner but I didn’t want to over ride as he has a habit of cantering! The medium trot across the diagonal wasn’t as good as it could be and the 15 m circles were a bit big which threw away stupid marks which you just can’t do. However, the canter was ACE. I wasn’t as giving on my give and retake of reins on the circle as it encourages him to get long and change so I lost marks there but not as many as I would have lost had we made a mistake. I rode the mediums forward and struggled to get as good a transition to medium as I would have liked but again, it was a sacrifice I had planned to keep him moving forward and not breaking or changing. As soon as the canter finished I had a massive grin on my face for the final movements. We’d nailed it and as soon as I halted I had tears in my eyes as we’d delivered the best performance to date exactly when it counted. 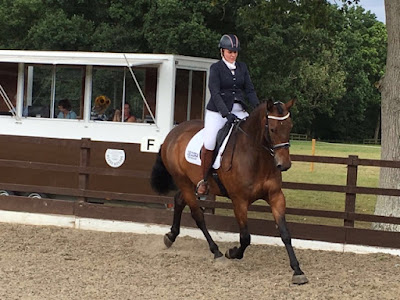 The high continued with my amazing friends who all came to support us who said that the test was great and I was hoping for a decent score as it felt like a solid 66/67 test to me. However when the results came out it would appear two judges agreed (67/65) but one did not and had us on 60%. I was devastated as it pulled my score right down to 64.something and although we were in the top 10 right to the end we got knocked out and finished in 13th place out of 22. All the scores were incredibly close and just a single percentage more would have had me in the top 10 but hey ho, that dressage and whilst I was really upset on Friday I’ve had the weekend to rant and think about it and however much I don’t feel like we deserved our final placing I just need to accept it and move on.

So in light of that, we had a conflab back at the yard and we reviewed the videos and decided that I would try and give it another go.. The only issue being that I don’t have enough qualifying sheets to do another AF. So, what do you do on a wet and crappy Saturday afternoon? You call up your local venue and beg for a spot the next day to do N23 (handily the AF test!). I was so lucky that East Soley could squeeze me in and so off we trucked to see if we could start AF.v2 #JusticeForBuddy ;o) 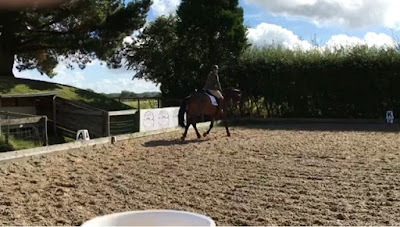 I like East Soley and it holds good memories for me as it was B’s first ever test as a 4yo and it was where I took him for his re-debut post Rockley. It can be a bit spooky though and we were outside where he has never done a test before so I wasn’t sure what I’d get. I needn’t have worried as he was excellent. His warm up was perfect and he felt totally on side, canter was perfect and there was no hint that he would change. The test itself was good, with moments that were better than Friday (mediums and 15m circles) but the little pickle spooked going into left canter and it took 3 attempts to correct it so we got a 4 for that and then he changed (perfectly) right at the end of his medium canter which gave us another 4! After Friday I wasn’t sure, with the mistakes, that I’d done enough to get a qualifying score but luckily the judge liked the good bits and so we ended up on just over 65% so well within a QS. Phew. 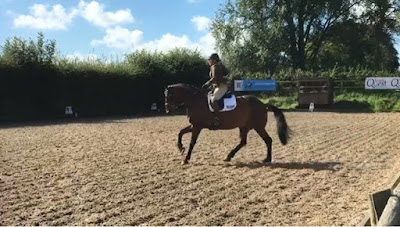 So operation AF.v2 continues this week with an evening outing to Merrist Wood which is a new venue for us so fingers crossed we get the sheets we need before closing date on Friday. No pressure at all!
Posted by Krista at 03:08